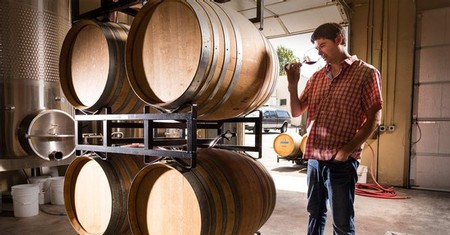 Established in 2010, Kevin and his wife Stefanie set out to produce limited, hand crafted wines that are complex, balanced, and pair well with food.  Kevin's love for wines from the Rhone Valley in France have led him to focus primarily on Syrah, Grenache, and Mourvedré from cooler climate and higher elevation vineyards in the Yakima Valley.  These vineyards produce wines with depth and power along with the finesse and delicateness required to complement food.

It all started in 2006, when Kevin had a simple taste of one of Washington’s finest wines and began an unexpected journey from wine customer to producer.  Over the course of the next four years, he traveled back and forth to Eastern Washington vineyards, worked under the tutelage of some of Washington’s leading winemakers, and returned to school for chemistry, microbiology, and oenology.

In 2012, Kevin released his first wine, the 2010 vintage En Hommage Syrah from Olsen Vineyard.  Immediately upon release, Kevin received a groundswell of support and buzz from the local wine community.  This wine promptly sold out within weeks.   In the following years, Kevin was humbled that his 2011 and 2012 vintage La Fraternité Red Blends were placed in the Top 100 wines of world by Wine Enthusiast and that he was named "Winemaker to Watch" in 2015 and "Best Emerging Winery" in 2018 by Seattle Magazine.

Today, you can find Kevin at the winery most Saturdays during tasting room hours, giving tours and sharing his passion for wine.

Kevin and Stefanie live in Seattle with their twin sons.  Kevin looks forward to teaching them how to drive a forklift at the winery one day.  The oldest of five boys, he graduated from the University of Connecticut with a degree in Computer Science and Engineering in 2000, which led him across country to Microsoft where he continues to work today.